There use to another weekly post like this called It’s Monday, what are you reading? which I had thought to bring back to my blog, but I guess I’ll do this one for this week!

WWW Wednesday is hosted by Sam @ Taking On a World of Words!

What Are You Currently Reading?

Sorry, I’m being boring and reading one book at a time and I’m taking my time with this one. My sweet sweet ass time at that!

I’m enjoying this so much and I’m drinking up as much of Rhysand as I can cause GUYS, I GET IT NOW.

Okay like, not to make this into a book talk or a mini book review but can I just gush about him in the 60% of the book I’ve made it through so far?

It really bothered me that Tamlin didn’t help Feyre while she was puking her life out in the beginning of the book — like HE WAS THERE WITH HER and he SAW what happened yet he says he loves her but doesn’t even stir when she’s up at night throwing up? And okay Rhysand does make QUITE an appearance at times (but can you blame a dark lord, really?) but at least he is decent enough to hold her hair back and try to walk her through calming her mind down. Even if she can be a jerk to him and say hurtful things, the way he just rolls it off his back and just KNOWS her. The fact he PAYS ATTENTION to her. In a way I feel like Tamlin never did. I’m just saying, I don’t know where this book will lead, I don’t want to run across Tamlin EVER AGAIN but I have a feeling that’s bound to happen. I just wanna slap Feyre sometimes and tell her NO, TAMLIN DOESNT LOVE YOU. How he acted before she decided to stay in The Night Court wasn’t love!

Though I do miss seeing Lucien.

What Did You Recently Finish Reading?

My friend over at Stories and Sweeties had mentioned that one of the books in this series covers Oz and I know she knows how much I use to talk about Wizard of Oz and Wicked back when we book blogged together in 2010. I mean LOOK AT MY OLD BLOG LAYOUT. I’m OBSESSED with The Wizard of Oz, it holds a lot of meaning to me. So I started with this before I was going to go into the series — I have an ehhh relationship with steampunk. I LOVE steampunk don’t get me wrong but when it comes to steampunk books I get easily lost and confused for some reason.

This is a steampunk retelling of Peter Pan and it was a very short and rushed read that didn’t really leave me wanting to know more about what was going on tbh. That’s also another thing I Have an ehh relationship with; I love Peter Pan and I love retellings but Pan retellings sometimes… I don’t know, bore me.

What Do You Think You’ll Read Next?

This is such a loaded question lmao!

Ugh I just read the blurb for A Court of Wings and Ruin and saw Feyre does go back to the Spring Court, FML. I don’t wanna see this go down. Or have to hear about Tamlin again.

I’m going with The Hazel Wood because there was a huge ad for it that covered my entire screen when I went to get the book cover for ACOWAR lol. 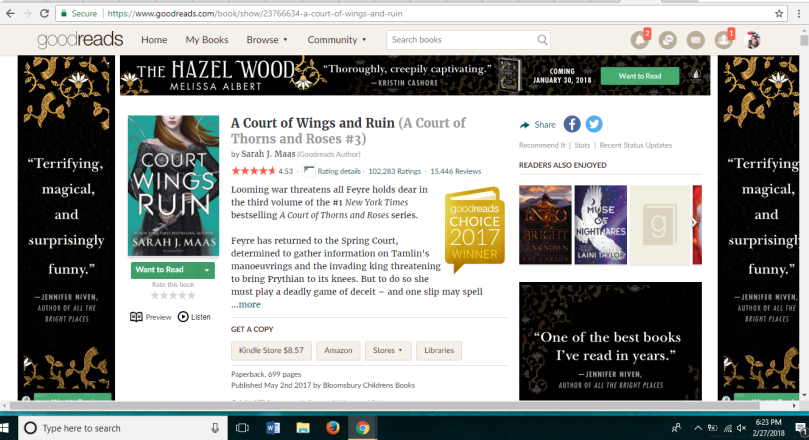 AND IT MOVED LMAO.

I’m also putting down one of these Sophie Kinsella books because it’s been awhile and I need some fluffy British Chick Lit even though neither of these sound like I’ve Got Your Number sort of fluffy read to them.

But who knows, I’m a mood reader so I might not read any of these — though I’m hoping I at least get to the last book of this series so I can quit quitting in the middle of a book series! I about made myself go cross eyed trying to finish The Lunar Chronicles before last year ended which wasn’t hard but Winter WAS hard to get through during some points!

What’s next on your TBR?

I’m Hazel Marie, formally known as marielovesbooks. I use to be a book blogger and youtuber from 2009-2013 before I decided to change my blog name and direction.

And now here I am!

I like to talk about all things books, TV shows and challenges I never complete but keep joining!